20 Ways to get Dungeon Hints in the Town 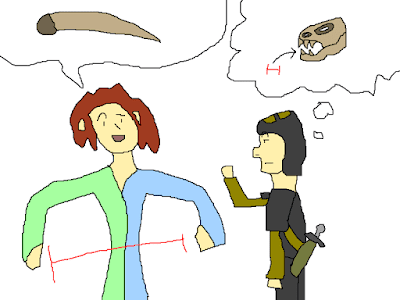 [1] The children in the village have a creepy nursery rhyme related to the dungeon they hum and sing when they play in the streets.

[2] Sacred shrine of the local folk religion has a mural depicting a priestess banishing monsters back into a pit in the ground.

[3] Once yearly harvest festival celebration conveniently happening when the party is in town. Features a giant paper mache dungeon monster being “slain” by someone dressed as a knight.

[4] Old seamstress. She'll bore you to tears about all four of her husbands who died in the dungeon, and how they died. Seems strangely enthusiastic and lighthearted about telling people this.

[5] The cellar in the tavern is made of the same brick and masonry as the style in the dungeon. The secret lever hidden in an archway is the same as the one in the dungeon too.

[6] A single, 1 HD monster from the dungeon got loose inside some lady's attic.

[7] Village drunk swears that an evil spellcaster in the dungeon is whispering spell incantations in his ear whenever he sleeps.

[8] The richest farmer in the village has an antique family heirloom from the village, made of the same gray-green metal as the bladed traps of the dungeon were forged.

[9] The Lord of the village has gotten a few 'gifts' over the years of strange, presumably cursed items from the dungeon that he has locked away in a dusty corner of his estate.

[10] Skilled herbalist has healed multiple poisoned victims from the dungeons over the years. What kind of poison? Gather herbs for her all day in the heat and she'll tell you.

[11] Once every year, the villagers don't drink from the river as a strange yellow dye flows down it from the mouth of the dungeon that feeds the river. If you drink the dyed water you get a very specific mutation; common in the dungeon.

[12] Some of the villagers here grow a type of fungus from the dungeon in their gardens. They tell you that it's not dangerous; as long as its exposed to sunlight every 24 hours or so.

[13] Old man in the village has a very peculiar old scar he got from the dungeon when he was a lad.

[14] Bard in the tavern regales listeners with a folk song about the townsfolks favorite folk hero; an idiot who got swallowed by a monster so it left everyone else alone. There's a key detail in the song about this monster.

[15] Old Witch has a magical talisman she once used when exploring the dungeon. She won't give it to you; but might tell you why she wore it.

[16] Town militia captain has been scouting the demihuman residents of the dungeon and understands their organization better then anyone.

[17] Gossiping prostitute managed to seduce the last Wizard who traveled to the dungeon. She knows he's dead, but also secretly read a spell or two from his spellbook. It might still be there, or the dungeon residents might have learned them.

[18] Village priest has a few favorite hymns he uses to exorcise the demons and spirits of the dungeon back into submission. Won't teach you unless you donate to the church. Heavily.

[19] Tavern owner claims to have once had a pet creature from the dungeon, but it died years ago. It's buried somewhere in the dirt field between here and way over there.

[20] The village blacksmith has repaired several dented in chunks and cut up pieces of armor from dungeon explorers in his day. He has a pretty good idea what kind of weapons they use there.
Posted by Cacklecharm at 6:00 AM