6 Ways for Dogs to shoot Arrows

I found this cute picture and I instantly started thinking about animal companions, playable animals, and fantastic animals to have in a war. Including in this might be hyper competent archer dogs. These archer dogs I think are more implied to be like a walking quiver and assistant to a human archer. But more importantly how the HELL does a dog shoot a bow?

Ways for Dogs to Shoot Arrows – Roll 1d4
[1] One end of the bow is heavy and has a clawed foot design. This allows it to be stuck into the ground and stand on its own weight. Then the bowstring is drawn back by the dog's mouth and launches the arrow, which is either placed first on a special ramp on the arrow to align it or put in the dog's mouth with the dog skillfully placing the string into the arrow nock in their maw. Also; this would cause some serious burns and cuts from the arrow's fletching or bowstring. Maybe a leather lip guard might be needed like a typical archer bracer.

[2] The crossbow is attached to the dog's back like a saddle. It can be fired either by a special mouth lever, or just fired at will in an abstract sort of way as a mobile weapon. The dog might be able to reload it by rolling over and placing the bolt back on with their teeth, but in a more realistic or practical setting would require a human or something to load it each time.

[3] The dog can throw down the bow and it has small studs on both ends of the bow; these prop up the bow horizontally. It has a duck-bill style design so whichever way it falls, it will always fall with the bow angled upwards at a shallow angle. The dog places the arrow on the string and pulls back with either their mouth or both front paws and releases to fire.

[4] The dog has a minor amount of anthropomorphism. They can fire the bow while standing, though they can't walk or pick things up like a human, but instead jump up on their feet like a dog could and then shrug the bow off their shoulders, firing it similar to a human before putting it back on their head and running like a regular dog would afterwards to reposition.

[5] Prehensile tail. Slinging the bow across the dog's back at an angle, the tail could wrap around the string and pull it back while the dog uses its mouth, biting near the arrow head, to position the arrows onto the pow and fire. Awkward position but could be fired pretty organically and on the move. Naturally this technique doesn't work with stubby crop-tailed dogs.

[6] Dog rolls onto back, uses hind legs to pull bowstring. Holds bow with front paws, aims upside down, tongue lolled out everywhere with each trick shot. 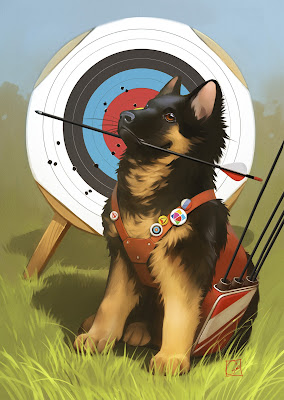