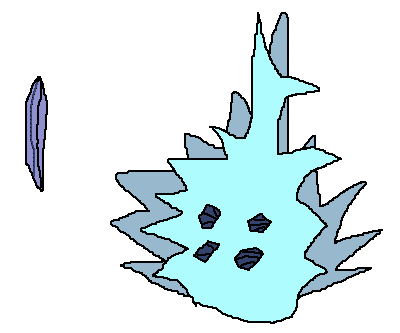 [1] Ice Crystal Array
Built into the snow-fortress and frozen snow walls; complex arrays of permafrost ice crystals arranged to allow their resonance to manipulate pure ice and snow. Pulling or rotating the crystals, or inserting them into empty slots, controls temperature in the room and even weather outside by manipulating the carefully aligned system of ice and cold. Even a weak hit with a blunt weapon or if a character wearing metal armor is shoved into it the crystals shatter and the entire contraption fails spectacularly as shards of crystal and frozen water fall from the ceiling.

[2] Bubble Channelers
Giant coral domes with weird 'pipes' and mounds built into it in the ocean. Channel water currents and create oxygen bubbles in little circular chambers that can help humans breathe underwater, if desired. Blowing on the pipes can channel bubbles and air in great currents; bubbles blasts that can act as defensive platforms that can capsize ships or knock away Merdragons.

[3] Ligament Mecha
By chewing up and spitting out ligaments and tendons from their victims; cannibal apes and spit and stick them into “joints” of wooden and stone war machines. These joints are kept moist by sacrifices of blood from forest creatures and human victims; and kept fed by the same blood. They are stroked with different reeds and brushes to give them a sense of touch, and are then led by the apes who ride around on the sloppily animated war golems; needing constant blood as their fuel.

[4] Dwarven Glasswork
Create invisible walkways and bridges across long chasms as an extra line of defense against invaders, as well as invisible spikes in pits. They're not actually invisible, they are just glass that has been cut in such a way that you can only see the cut lines and edges of the piece from a single, very specific angle. Usually, this is marked by a dwarf ancestor or God's statue; line up your eyes level to his and at just the right angle you will see the craftsmenship of the dwarves.

[5] Asuerian Balance
Ancient civilization named Asuer. With great religion based on men balancing on poles for their whole lives and gods of balance and harmony to create a strong society. Principles incorperated into their work and architecture; found methods to perfectly balance even huge objects, slowly remove the base until they float in the air with nothing supporting them. The object will regain gravity and crash into the ground if another force hits it that would move it or nudge it normally; jumping on a floating platform while wearing too heavy armor, for example. Most are made of thick stone so would need a strong force to knock them down. Have even tougher structures that are supported and can't be knocked down nearly as easily; entire castles suspended over a chasm on a single reed.

[6] Replaying Pots
Pots that were spun with small fibers with religious chants and magic spells spoken; the vibrations of the voices and sounds were then trapped within the pot's grooves, and can be released by spinning the pot with a needle and amplifying the sound through a funnel, conch shell, horse skull, etc. Spells played back have some amount of magic; you could both learn a spell and might also accidentally be cast on the spinning wheel, releasing magical energies into the present day. You could also use a pot with a hidden groove to store and hide a hidden message.
Posted by Cacklecharm at 7:00 AM