The powers here are based on this blog post by Goblin Punch. Ambrosia, or item #30 stuck out to me especially; you essentially get very powerful godly abilities for a limited time; after a short period your character will leave the world and become unplayable as the innate cost to using this item.

However, I thought the linear progression of powers was a little less interesting then making it totally random. Instead; each exploration turn you roll on this table. At turn 5, you don't roll on the table and instead have the universal epiphany, and your Wisdom score becomes essentially infinite (treat Wisdom modifier as +10). At turn 6 and every turn beyond, you must make the save or depart the world. If you make your save, you get to roll on the table again to get another godly power. 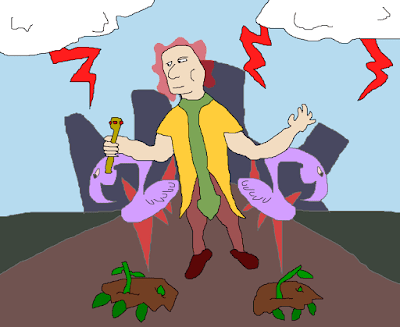 20 Godly Powers
[1] You can cast Fireball at will.

[2] Gain the power of flight & levitation at will. You fly as fast as a horse can run.

[3] Become locally omniscient to a range of 50 inches or about 4 feet. You know what everything in that range is thinking, what every item contains, the properties of all magic items, and what has happened in that very spot in the past if you investigate it. Relaying this information in a helpful matter, such as telling your ally how to break the curse on their magic ring, takes a whole turn; there's a lot of atomic mass and stories of every scratch you need to sieve through before you get to the critical details.

[5] You become immune to any element or specific spell of your choice. You can also wait until you need this power; such as when you fail your save vs a disintegration spell and then you say “oh actually I'm immune to that.”

[6] If you wave your hand, you can conjure structures or parts of buildings into existence. The complexity and hardness of materials you are selecting change how quickly you can build; if you simply walk through a field and wave you can create half a village worth of mud huts in a single turn. Making a simple stone bridge or a decent wooden house will take an entire turn, where as it would take a turn to just complete a few feet of wall on a heavenly cathedral.

Your buildings both finished and in progress are permanent, but you can only create things out of the normal materials and will need to supply anything more rare or expensive then wood, mud, stone, granite, or simple dyes.

[7] You gain total control of the weather. Storms have to be “built up” from calm days and you'd have to “calm down” a raging tornado, but other then that you can make it do whatever you want. You can even start a storm or bring rains across the world if you have a general idea and have visited the place you want to influence.

[8] Ultimate self-polymorphing. You can turn into any creature you can think of; provided its HD is less or equal to your level. You do not lose your powers in this new form, and you get to keep your health total even if you turn into a creature with less HD then you. You always have a 'tell' in every form you have now, including your normal form. such as glowing eyes or your hair's highlights.

[9] Your voice has the innate property of Command and Suggestion spells. Enemies still get their normal saves against you. Additionally; you can “steal” the voice of anyone who tries a similar spell on you for a turn, which renders them mute for their impudence. You can then speak with their voice as well as a perfect duplicate, and you still have your Suggestion and Command powers through it. They will have to either do something for you or “steal” their voice back by killing you or reaching their hand down your throat when you sleep.

[10] By simply looking at someone, you can bestow or cure mental insanity or make people see things that aren't there. You don't have to make eye contact, just watching them. The hallucinations you give to others function as illusion spells that only the target can see or interact with.

[11] As long as you wield no weapons, wear no armor, and do not attack first, nothing normal will willingly attack you. Animals will act mellow and peaceful towards you instead, and even creatures made of magic or conjured will hesitate. This allows you to be the ultimate diplomat, but you could still be jailed. You can also walk on water.

[12] You grow two additional arms. These arms are just as strong and dexterous as your first pair, and you can now hold two two-handed weapons, use two shields, fire two bows, etc. At will, you can conjure a Chakram in each hand, each one tied to a random element, which returns to your hands after you fling them.

[13] Each step you take, little sprigs of grass and flowers rise up at those spots. You bring about the growth and life in a land, and tracing a plot of land lets it produce a bountiful harvest. You can also heal or restore magical plants or treants, and can toss a seed like a grenade that explodes into entangling vines or a mass of flowers that grow on and rapidly decay undead. If you are of a more evil alignment, you can also do the above abilities but with thorny black briers instead and drain the life from a land.

[14] If you are hurt, you heal +1d6 hit points per round. You recover all but one point of damage from each attack, spell, or failed saving throw that was a source of damage. You can only be killed either by being whittled down to nothing, or killed in a few rounds of intense damage. You can transfer your life points to others with a touch, which are not regenerated by this power.

[15] You become as strong as 10 men. Treat your Strength modifier as +10 before magic equipment.

[16] You no longer have daily limits for casting spells; you can still only prepare the maximum number for your spell slots and level, but don't need to rest between then and preparing new spells. If your character cannot cast spells, now you can.

[17] You drain the life force from your foes; every time you slay a foe, you may heal yourself or an ally by the monster's number of HD as Hit Points. As in, when you slay a HD 9 dragon, you can suck its life force and heal 9 hit points.

[18] In your hands materializes the Splendid Sword. It is a highly ornate, divinely crafted blade, with gemstone sockets along the flat of the blade, and an edge that glows and leaves an afterimage of golden magic as it flows through the air. Treat as a +4 magic sword. It has the vorpal property (beheads anything with a head on a natural 20 attack roll) and everything you behead with the sword has its innate powers absorbed by it like The Highlander; you gain the to hit bonus of fighters killed by the sword along with their blade arts, monsters have their magic powers copied into the sword, etc. You can recall the Sword to your hand or sheathe at any time with a thought.

[19] You only make noise, can be seen, be detected by magic, or breathe if you want to.

[20] You can now turn other people into monstrous beasts and creatures; requiring eye contact and a dramatic flourish of your hand. They don't get a save, but the transformation is always slow, maddening, and an ironic twist of fate to represent that person's character flaws and fears. If the person is equal or higher level then you, they get a save. It usually takes 1d4+1 days for the transformation to finish, and there is nothing left of that person's mind and will in the beast by the end of the week.

Monsters retain their level/HD and gain that as their new form's HD (but lose -1d4 HD if they really hated you before you turned them) and obey your commands. Monsters always gain abilities that fit their old personality and twist them for your purposes.
Posted by Cacklecharm at 7:00 AM