This is going to be the first article of many I have written based around very abstract or vague concept. Hence, they are titled “Vagueposting”. They are a bit more ranty then my other blogposts and are more about capturing a specific mental feeling or “emotion” that may be hard to describe, as such this is due warning that my Vagueposting articles will be a bit more focused on fluff and abstract fantasy world stuff then actual game rules- however I do hope these articles can communicate the ideas that I am thinking of when I write them, but you are free to skip them if you want more useful or structured game content. Hence, Vagueposting. 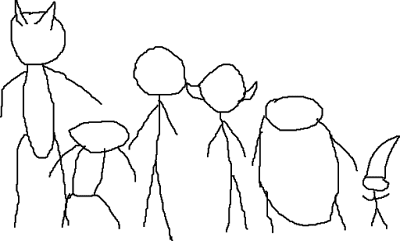 Now when it comes to the standard mix of Demihumans; I used to not like them as much, but they've grown on me a bit. My main problem with them is the lack of diversity in body types and cultural-stereotypes. If you take the generic 5 races; Human, Elf, Dwarf, Halfling, and Gnome (some will also include half elf and half orc to this list), you basically have a majority of these races as just “shorter version of human”. This, to me, is really boring. In many of these worlds too, Elves are also shorter then humans, so it's really more like 4 versions of shorter and/or more magical humans.

Culturally; ALL of these demihumans are depicted as being longer lived and wiser/more conservative in action or attitude then humans, with various cultural traits between them. Elves tend to be close to nature, with Gnomes usually also being close to nature or being mad tinkerers ala Warcraft. Dwarves are all about their grudges and conservative cultures, where as Halflings are intentionally designed to be passive and a bit boring; just pastoral, comfy villager people. I think in order for these Demihumans to be more interesting as a whole, there needs to be something that really sets Halflings and Humans apart, as well as Gnomes getting a bigger list of differences to Elves.

However, the one thing I'll say about this that I do enjoy is it gives the “human” race a more unique element. Humans instantly stand out as being the largest and usually physically strongest race (though Dwarves tend to be close, or perhaps stronger but stockier, usually implied to have more endurance), which is a nice change of pace from humans being the generic middle of the road everyman.

Now if you read this blog, you know I have a LOT of weird race ideas. Some of them are furry, some of them are aliens, some of them are just weird. I want to mention here I do enjoy certain aspects of Demihuman-like races, things like goblins, orcs, trolls, hobgoblins, (as an inclusion to playable races) feel different to me then things like tengu or khajiit, the non-animal nature of them I think makes them actually feel a bit more foreign and interesting.

Now, let me share some of my favorite demihuman depictions. 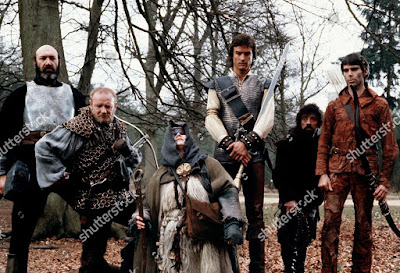 Hawk the Slayer
In the Hawk the Slayer movie, there are a few demihumans depicted. Gort the Giant on the left, Baldin the dwarf as second to the right, and Crow the elf on the far right. The woman in the center is just an old human witch/sorceress, I have no idea why she's squatting down so low. Unfortunately, the highest res image I could find for this picture is this shit with its stupid watermark, so you'll have to forgive me for that. This is a classic movie that a lot of people have nostalgia for, especially the UK, I personally only watched it recently as a part of my Appendix N cultural enrichment. (Hawk the Slayer actually was made after the LBB and AD&D, clearly it's based on the same tone however.)

Anyway, Hawk the Slayer features three demihumans. There's a giant, a dwarf, and an elf. I want to mention here that as movie actors, they just grabbed actors who fit the physical profiles here, and it works REALLY well. In my mind, I like to imagine these demihuman races as just far offshoots of humanity, or in a fantasy world these fantasy races are ACTUALLY races of humanity, not different species or fantasy-esque version of “species”, and can freely interbreed with humans. The race of giants is just really tall men. In the same way that real life races existed from evolutionary pressures in their environments, this fantasy world could have similar pressures. The giant is just a race of really tall, if somewhat slow witted people. The dwarves are just very short, small people who are hardy and used to living underground. I like this a lot as it implies a much more grounded setting in general, but actually makes the whole of humanity more interesting in the fantasy world. I also think that this makes the “Elf” as a race or subspecies even more interesting.

While in the real world no human races fit these kind of profile, the thought of a human race developing sharp senses, quick wits and agile fingers for archery, and an affinity for magic (perhaps to evolve for survival in a fantasy/fairy forest?) is really cool. I like this because you can imagine some weird combinations for special snowflakes; what would a half giant, half elf look like? Probably something pretty close to a tall human who is a bit slender, perhaps with slightly pointed years and a knack for non-academic magic? Of course, crossbreeds don't have to actually be a factor at all, I just think it's an interesting part of it. Secondly, you can take into account that Half-Elf is a racial choice often in games, but I actually think this detracts from the above feeling. Somebody could have Elf in their family history and just look like a normal human, just with slightly more elf-ish features, a slightly longer lifespan, and a bit more of a loner attitude. I think that's more interesting then a specific and strong divide between human, elf, and half-elf. 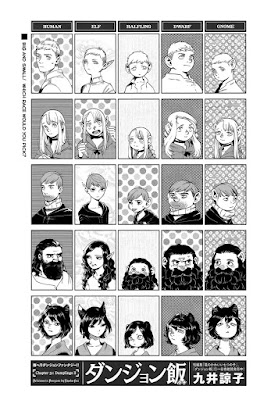 Dungeon Meshi
Another of my favorite demihuman race depictions is from Dungeon Meshi. It has the generic list of races (humans, elves, dwarves, halflings, and gnomes). On top of this, it also includes very humanoid orcs AND ogres/oni who are very humanoid as well, which I think really adds to the experience of rounding out the race list. Of course, there are also kobolds which in typically Japanese fashion are dog people, but for the most part the race list is very human and pretty interesting.

I think this gets even better because of a specific list of chapters in the manga. There is a part where the main characters get race swapped due to stepping through some changeling mushrooms, which change whatever steps through them into a closely related species. (It's not a permanent change, you can just take a bath to wash away the spores.) 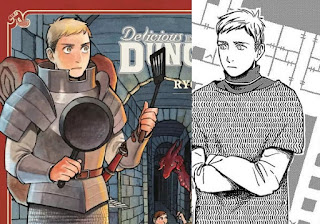 Here we see a Laios, a human and one of the main characters of Dungeon Meshi (arguably the protagonist) detailing the benefits of being a dwarf. This chapter is great because the characters can give us some perspective on what their new form is like different from their old form. Laios specifically notices that Dwarves are very strong, tough, and have good dark vision making them perfect for living in dungeon environments. Of course, later he finds out it isn't all its cracked up to be because Dwarves have no stamina. (usually the opposite in most fantasy worlds, but I like to imagine he's more referring to short term “sprinting” stamina, if given short breaks Dwarves can work or explore much longer then a human could over a full day or several days, but this is just my headcanon for the Dungeon Meshi universe.) 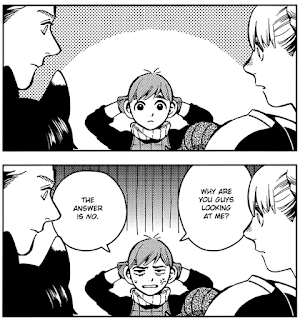 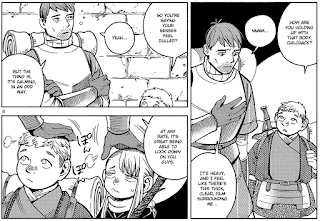 Another good example is Chilchack. He's a halfling, who gets turned into a human. I never considered a difference between races in this way, but I think it's really cool- even ones own perceptive abilities are routed in biology. Halflings seem to have better senses, both of touch as well as taste and smell (something that Senshi is jealous of, as a food-obsessed dwarf). Later it even explains the fighting styles of the races too; Chilchack in his human form tries to just run back while the group fights a monster, but finds that it targets him first as he's the biggest- normally he just runs away and becomes unassuming as a short, stealthy halfling rogue.

Unfortunately, we don't get too many examples of what differences an Elf, Ogre, Kobold, or Gnome may have, as the characters who turn into those races aren't very talkative, and I'm pretty sure nobody gets turned into a Gnome for anything other then a visual gag. While just one chapter of the Manga I think it's really telling and interesting in how the mangaka put a lot of thought into how the various demihumans would actually feel to be if you were to suddenly change into them, and by that we can infer how they live their lives and even how they may explore dungeons or pick their various related professions and roles in a party. Marcille also, somewhat humorously gets turned into an ogre (which I call oni, since they look more like Eastern “ogres” then a more Western “ogre” if that makes sense)- she doens't talk much in this form and doesn't really cast any spells that I can recall, so I think it's being implied that ogres are less intelligent then other races, but are obviously huge and very strong. Also, a human character gets turned into an Elf in a later chapter and describes themselves as being physically weaker, but being able to "tell" that something has magic in it just by touching it, which makes sense. This fantasy world also explains that magical energy or mana is a direct biological component and some races (like Elves) just have more of it then humans, but will pass out or become weak if they cast too many spells as it is similar to bodily stamina.

Finally; this interesting changing of races thing is so well explored in this manga that there's even a panel that logically explains why these race-changing mushrooms aren't totally uprooting the setting. 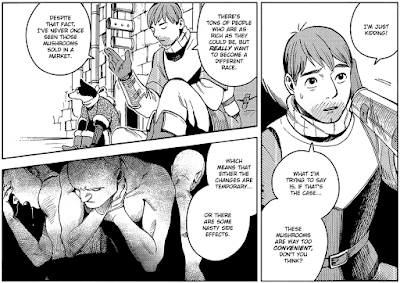 For those interested, the entire Manga is a treat, but the individual chapters referenced here are the "Dumplings" chapters, since every chapter is about food. Anyway, hope you enjoyed this first VAGUEPOSTING article. I have a few more written up in advance before even finishing this, but hopefully as an introduction this works out well for trying to explain the purpose of these.
See you next time.
Posted by Cacklecharm at 6:00 AM