This is a too simple system for Encumbrance. It's not actually a system. I was going to call this “Dirt Simple Encumbrance” but it's not a real system and this name is more funny. 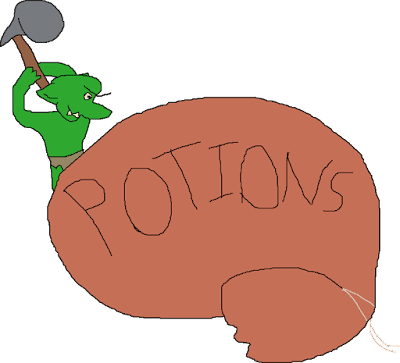 Big Sac
Nobody gives a shit how much stuff you carry around. You can carry around 6 torches and 14 arrows and a whole heap of iron spikes to wedge doors and three swords and 25 keys and nobody cares. Just tell players to write down all that stuff; just whatever they're willing to pay for and how much they're willing to keep track of. Your character sheet can have a hundred tools and sticks of chalk and I really don't mind this. You're not going to remember you have it and even if you do I'll reward you instead of making you play the game slower.

Then, you have the Sacks. Each “Sack” unit is one over-encumbered unit. Carrying a sack makes you vulnerable, you go last on the first round of combat (have to put it down before drawing your weapon, or autofail the “act in surprise by rolling 6+ with your class HD thing I do) and increases the chance of drawing wandering monsters from the noise (+1 on a d20 roll, probably shouldn't use if you use the 1 in 6 chance some do). If you're playing a game in real life, put an actual little burlap sack/dicebag on the table in front of the player, fill it with little rocks or beads or whatever, make it cool.

Each “Sack” is for whenver your characters are carrying around a ludicrous amount of stuff. If you're on a long term trip, then all your food is in one sack. All your camping gear is in another sack. If you brought disguises to wear to a fancy ball, that's a sack. One shovel doesn't encumber you, but if you want to take six of them to outfit a digging team, then that's another sack. Obviously all your treasures go in Sacks- all your coins can fit in a Sack as long as there isn't like a thousand of them. The big portraits and art items can go in another Sack. Magic equipment and potions go in another Sack, if you don't want to use them. Carrying them without putting them in a Sack is what exposes you to curses; even if you don't equip them. Carry an extra Sack if you want to be safe.

The exception to the sack rule is if you're wearing the heaviest possible mundane armor available in the setting- so Bronze Fullplate in a Bronze Age kind of archaic era game, full body suite of Chainmaille in a dark ages kind of game, or a sort of giant Havel the Rock/Onion Knight level of ridiculous full plate armor in a high medieval style of game. Anyone wearing all that shit counts as though they are wearing a sack. You also have to count as carrying a sack if you're carrying a large tower shield, or an oversized (d10) weapon. Each of these sacks don't stack, so if you're wearing heavy armor you might as well carry a huge weapon and big shield too since you'll be over encumbered anyway. Basically being heavily equipped = carry a sack.

Nobody cares about pounds or load. Just care about the Sacks. You Sacks can get stolen or left behind. There is a 1 in 6 chance you leave behind a sack on accident if you run in combat, or all of them if you didn't make a fighting retreat. You have to lug the sacks over a hill or through a river. If a character dies, they drop their Sacks. If you fail a save against dragon fire, one sack at random is burned apart- maybe if it hit your sac full of coins it just melted them a bit instead of destroying all your healing herbs and boiling away your sack full of healing potions you thought it would be a good idea to bring.