This post is being written during the April shutdown due to the Corona virus. I often write blogposts in advance, but this time I thought I would actually straight up tell when it is being written for the very specific backstory I'm going to give you. Basically; during this shutdown everyone is just staying inside. And that means everyone is on the internet; some days it's pretty slow, or if the internet goes down where I live for whatever reason, then I don't have much to do since I can't even go to the gym.

But you know what I can play? Games that don't require internet access. And among those, I redownloaded Dungeon Crawl Stone Soup. I haven't played this game in years, and it's something I've always had a lot of nostalgia for. There's no sarcasm when I say that this game's massive dungeon crawling with many interlacing mechanics, loads of great races to play, tons of monsters and spells, and a bunch of other stuff is what helped get me into Dungeons and Dragons.

However, something very specific has stuck with me over the years with this game. And that's the Orcs.

Dungeon Crawl Stone Soup Orcs
The Orcs in this game are not exactly like any other orcs I've seen. They have this great look to them, but sadly they are just sprites! I love the way they look though. They have a more humanoid skin tone and appearance in general, but still look very “orc” ish. They have the classic tusks, glowing red eyes, and have an overall more “ogreish” appearance to them, but yet stay within a relatively human frame for size and shape. This in mind cements them as a more “baseline” race, despite them still being very orc ish. Then you have their ears, which are more bat like then pig like, but don't cross over too much with elf or humanoid ears. They also have a more rounded face, except the fat one (Blork), giving them less of that hulking brute look- it reminds me a bit of Lord of the Rings goblin/orcs/uruks in a way, though in Crawl they are explicitly bigger and stronger then humans.

As for the more lore aspects; I like how they have so many different designs and how they are a pretty constant threat throughout the game; their culture and general ideas behind them and the unique playstyle you get if you play an Orc who follows the Orc God Beough (only Orcs can follow this God), then you can recruit other Orcs to your side. It's pretty neat. Plus they are skilled with Fire magic, which is fitting, and get a bonus to the axes skill which makes sense, plus in general all the Orc mages and Priests you fight give them a more rounded depicition then just being a bunch of generic “warrior” dudes. They are very much a proud warrior race- but they can take it to the extreme which is where Beough comes in, making them racial supremacists. I even love their description;

“An ugly subterranean race, orcs combine the worst features of humans, pigs and several other unpleasant creatures. They tend to run in packs or mobs, and delight in outbursts of insane violence.”
-From Crawlwiki

It gives me the distinct impression that this game's narrator is of an ancient, high elven race or perhaps an omnipotent 3rd person, lumping humans in with the world's fauna and as an 'unpleasant' creature at that. That may not be the way you're supposed to read into it, but I do. I love it. You can also see some of the inspirations from the animals there; I wonder if the author originally intended to have “humans, pigs, bats, and several other unpleasant creatures” included in there; their ears give me a distinct BAT look to them, plus them being a subterranean race in this game makes it fit.

I've already spent several blogposts talking about pig orcs, or more specifically, my P'orcs. As much as I like this homebrew take on the race, they don't really scream “generic fantasy orc”, which can be a bad thing sometimes. Any unique take on a race or thing in fantasy means extra learning time for your players or readers. Secondly, I have to be in the right exact mood for my P'orcs, where as the DCSS are much more easily seen as “Orc”ish in my eyes. I might switch to showing my Orcs in my games as more akin to the DCSS orcs, as opposed to my unique snowflake P'orcs.


But specifically, this blogpost is about their appearance, and more specifically their LACK of a appearance. As a game purely with sprites or originally ASCII graphics, the orcs lack definition. They only exist in description and as basic sprites; I would love to pick the brains of the original guy who did the spritework in this game's art to see what inspirations he was using for his Orcs, because they come from a very unique places. I've never seen any orcs exactly like this. 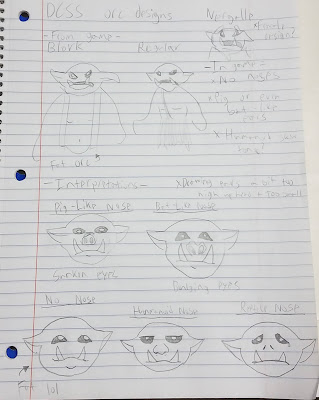 DCSS Orc Depictions
Here's a drawing I made of the Orcs from DCSS. In it, I experimented with different orc looks, and how to depict them in a slightly more detailed style then their sprite counterparts. The biggest issue though is the lack of a visible nose in the game. I then drew them with several nose types; including bat, pig, and humanoid noses. I drew different expressions since I'd have gotten bored with drawing them all the same way.

This is a piece of fanart of Blork the Orc, the fat unique Orc, about to get stabbed by an Octopode character (you can play an Octopus in DCSS, which is pretty cool). The artist here drew Blork with a much more “ogre-ish” look to him, though that could be just do to him being fat. Notice- a more humanoid nose was added here, since it isn't present in the sprite.

This picture here are several sketches of a felicid character (cat person, but not like a Khajiit. Just a straight up quadrupedal cat with magic and claw attacks). The top left frame seems to have a cat with Blork again, judging by the ears and weight, which once again gives it a more humanoid nose. 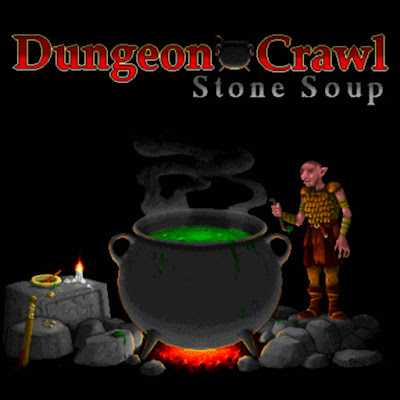 Finally, this last picture comes from the larger pixel art spreads that sometimes accompany the game when booting up. This creature here could be an orc, but I don't think so. It has downward facing fangs, red skin, small looking body next to that cauldron, and the armor and ears much more suggest a simple goblin or hobgoblin. Still, it's useful to see what its face might look like given their close relation to Orcs at least within most fantasy settings.

Conclusion
All in all, I really like the look and feel of orcs from DCSS, but it seems like creative freedom will allow whoever uses them to depict them however they wish. Bulbous, humanoid noses for those who want them to appear more uglier but more human, bat-like noses for those who may want to embrace the horror and deep-dwelling racial aspects, or a more pig-like nose for those who like their piggish orcs. I think “no Nose” might also be an option, but it seems weird and random; especially for a subterranean race to not rely on all of their senses in dark places. Perhaps they rely on their sense of taste and heat-sensing like reptiles instead, which is why I drew the silly reptile nose version in the last pictures. Truthfully, the pig to human nose ratio seems the most likely given the game's in-game description, but all of this was a fun exercise in drawing and imagination. Hope you enjoyed it.
Posted by Cacklecharm at 6:00 AM