The Ultimate Game + On "non games"

This is the ultimate game. The rules go like this. Whenever you try to "do" something in the game, roll a d6. The higher your roll, the better you do. Getting a 6 is like a really good or total success, where as getting a 1 is a total failure. If you get something between, then it has varying degrees of success.

If your character is really good at something, maybe add a +1 to your role do a few specific things. There are no stats or health points or anything, just the roll and maybe a +1 if you're good at something. There's no hit points, but if getting hit once and dying isn't fun then you can do a three strikes and your out kind of system. Everything else that happens in the game world happens because it makes sense to happen.

That was the ultimate game. You're welcome. 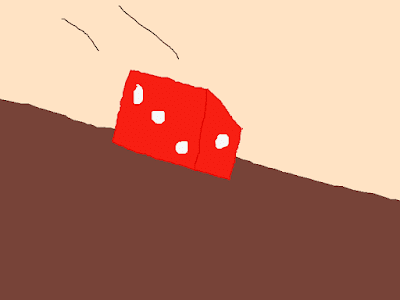 On "Non-Games"
Games that have no rules or have only fictional "in universe" rules are an interesting quandary. I've wanted to do a more complete dissertation on them for some time, but it's not a very highly explored or talked about thing, at least in any online circles I happen to frequent. I've written a few things that are close, though the Galaxy Far Away ruleset I talked about before is the stronger example.

In the few examples of these I've read, the most common of these follow the concept of the "game as a conversation", which is a nice way to put it and feels very open and approachable. Obviously this will require a consenting, well put-together group. I feel as though if the entire group are very strongly steeped together in the universal tropes and feel of whatever type of game or genre they are playing, this might one of the best if not THE best method of playing tabletop games regardless of context. Though most groups, even good groups, won't be quite as united together in synchronicity to go into this state of absolute "flow"- I certainly haven't, it is more of a theoretical concept.

Imagine, if you will, a group of people deeply invested in Sword & Sorcery and Appendix N material. They end up making a tabletop game with almost no rules- perhaps only a random table or two or a dice roll such as the "ultimate game" written above. Then, they run a tabletop game-as-conversation where the only real goal is to exactly emulate a Sword & Sorcery story as their own characters. In such an example, the exact rules, guidelines, dungeons, or other things that bog down a regular game attempting to emulate a Sword & Sorcery experience would only get in the way of such exact connection- and in this case I would feel the "Non game" of this concept would be superior.

However, these non-games have flaws and weak spots. I don't think they're some end all replacement for "simulationist" or "gamist" games. For starters, many "genres" are too wide spread for this to work. How would you run a non-game with the only genre concerned being a "generic fantasy adventure"? Everyone brings their own idea and baggage to the table when it comes to fantasy. It would be very difficult to get everyone to run and see the game in exactly the same light. Of course, a strong personality in the form of a DM/GM running the game would be best served here- but there will always be that slight disconnect. Oh, you find a trope of elves? Some people's experiences with elves are different then each other; an encounter with elves could be anything from a whimsical moment to a deadly encounter to a banal interaction in a fantasy kitchen-sink world. Though a group can move past this, there is always that slight hesitation that would come from the minds of those playing the game.

There are also a few games that try to emulate the idea of a "non game" by making a non-game a narrative game built around a fantasy milieu which is the real "game". An example might be something like FATE- which is NOT a rules light game, even though people bill it as. It's significantly harder to wrap your head around then an old edition of D&D or something where you control a single, well rounded character- an opinion of mine, sure, but a strong one. As such, FATE is a game based on the narrative beats of a story or experience, where character aspects and elements to scenes move the action forward; but the game's world is assumed to be the glue that holds it together, in the same way a more gamist game like D&D uses its fantasy game world to be its own glue, or perhaps ground floor where the absurdity of the rules is weighed and corrected. Concepts such as the peasant rail gun don't really exist because they are only "real" if the fantasy world beneath them didn't exist. The idea of a non-game game is to make the game about the fantasy milieu that "grounds" the rules without needing rules in the first place.

(I am now realizing this turned into Vagueposting halfway through writing it.)

So in conclusion, for a "non game" to work successfully, the real challenge is not clever rules design since there are little to no rules, but moreso the ability to communicate the implied setting, theme, or backdrop of the game. If somebody put in a lot of effort to cleverly write or design a setting introduction, write with a strong theme, or use a pre-established base such as the Star Wars example game above; it would at least do the majority of the heavy lifting. I don't know if "non games" are ever going to be widesspread and popular outside of very insular tabletop groups since, obviously, that is where they flourish best. I don't think we'll ever see non-games as published and sold products since there really isn't anything to ship. The closest thing I could think of is a non-game textbook with lots of story ideas, pre-generator characters, or tables and lists to determine what happens whenever there is no agreement on what would happen next. The great thing about these non games though is that technically ANY book is a sourcebook. Just pick up your favorite fantasy novel, emulate the tone and setting, and that's an RPG source book right there- just for a game without any rules.