I was watching Jojo's Bizzare Adventure recently. This came to mind.
Familiars = Stands
Sometimes, Wizards bind their souls to demons. Perhaps in this hypothetical setting, magic can only be cast by supernatural beings, and as such it is required to have a familiar to cast spells. Maybe the magic of a familiar spirit is the only kind of magic that is available to humans, beyond pesudo-works such as Alchemy. Perhaps Wizards don't have familiars, but you decree that your Warlocks do instead. Perhaps Wizards don't need familiars, but having one is a seductive power boost.

When a Magician binds a demon to themselves; it appears to them. Only those with familiars can see other familiars. Familiars can only be damaged by other familiars, or by “magic” weapons. Familiars can be Turned, but only if the Cleric knows one is present. To those not with a familiar spirit, the demon is invisible. The “attacks” of the familiar appear as spontaneous wounds on the victim's flesh, but it is truly the work of the demon perched invisibly on the Wizards shoulder.

Finally; nobody can get rid of a familiar, and everyone can only have one. Once you have it, you have it, and that's that. The familiar is banished if the user dies, except in the cases of suicide. Exceptionally forceful or ambitious demons will sometimes manipulate fate to make their user kill themselves, so they can be free, but by doing so lose access to the mental and spiritual energy that allowed them to manifest. As such, they trick their user only to kill themselves with a cursed blade they can reside in, or within a circle of standing stones that become their home, and so on.

Familiar Power Levels
Not all familiars are equal. Each familiar has a different level of power, represented by their size.

Imps are about as big as housecats to small dogs, and are the weakest and most common type of familiar. They deal 1d4 damage on a hit. Their maximum range is equal to a whole valley. Those with imp familiars often send them to spy on foes, or to deliver secret messages.

Devils are about as big as a human. They deal 1d6 damage on a hit. These include the ranks of succubi and incubi. Their maximum range is within a few rooms or a small forest clearing.

Danavas are about as big as an ogre. They deal 1d8 damage on a hit, and have a maximum range of one pace away from their user. Mostly, this means the master has to touch a target to harm them. 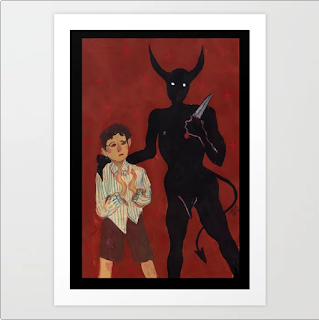 Familiar Powers
Familiars may have special powers. These are like signature spells, and if luck would have it the Wizard's new free magical ability could give them a serious edge over the competition, those once again it is the familiar doing the work.

In order to generate a familiar power, roll on the Cavegirl Gifted tables. Once for Aspect and once for Methods. Then, roll a 1d12 to see its damage/effect die size and then another 1d12 on the range if applicable. This isn't a perfect method but could get you close to something a random stand-power generator might be.

Side Notes
You could easily fit this concept of Familiars or “stands” into your game as a supplemental magic system. If you're one of those people with a hypothetical “you don't level up but get more powerful by stuff in the world” sort of guys, then this concept would work well as a side method of advancement for Wizardly characters. I would probably say getting bound to a familiar means you get +1d6 hit points, since Familiars are just an extra target for you to take damage from. 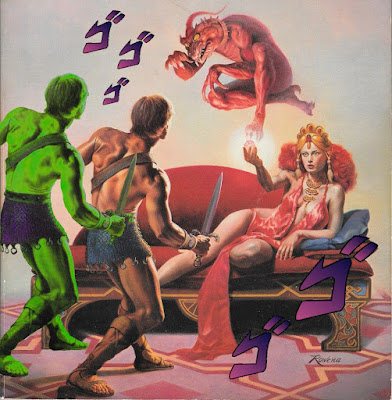 Email ThisBlogThis!Share to TwitterShare to FacebookShare to Pinterest
Labels: anime, Demons, familiars, yet another magic system