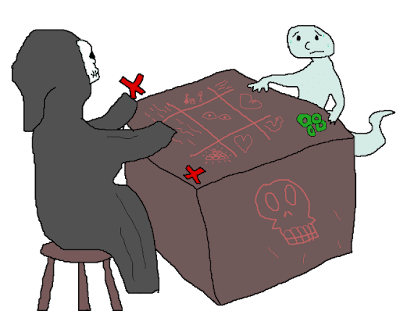 In some folklore, people who are dying can play a game with "death" or the Grim Reaper to come back to life. Many deaths let the souls pick their own game, but mine doesn't. He has a very specific game in mind. It's Tic Tac Toe. If you win OR draw, you come back to life at 1 HP. If you lose, death takes you on to the afterlife and that character is lost permanently.

However, you will notice the game's board is quite different. Each square has a single aspect of the character that they won't want to lose. It could be people nearby them and their companions, or it could be the features they most value in themselves, their wealth or magic items, or even things in the campaign world they'd want to represent. You get to go first, and you play with circles to “protect” things you want. Death plays with the Xs, and whatever he crosses over you lose. Or you could let Death go first if you'd like letting him start the game off and pick what he wants to take.

To use this in your game, you could premake a few naughts and crosses boards for your various player characters. Draw pictures of their body parts to represent their stats or just write out what they'd lose if that space is taken. Obviously this game would mean characters will have to give something up, even forcing them into a draw still means they lose parts of themselves for good. This concept obviously works best for game worlds with more personal, perhaps evil incarnations of Death. You could just as easily swap this figure out for something that wants to trade your “soul” to it like a demon, or perhaps a Warlock's patron granting a favor if you win a "game".
Posted by Cacklecharm at 6:00 AM