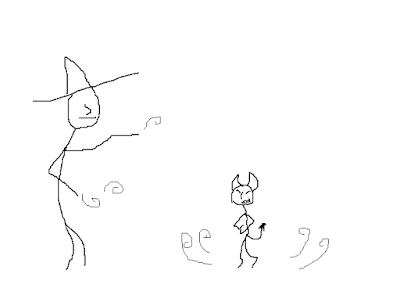 [1] Cappyrs Snake - 1st level
Out of the palm of the caster's hand comes a long black tube that writhes in midair. It is a Cappyrs Snake, a special type of constrictor without a head. Its long black body ungulates around as though it can fly, and constricts and attempts to crush anything it wraps around even though it cannot see or eat; it still targets living beings before attacking objects.

When summoned normally, this spell takes a full round to extend out of the caster's hand, becoming a long 3 HD snake which deals 1d8 damage each round it crushes someone. It can only be escaped on a successful save at -3, the save difficulty being increased if the snake has a higher HD. It has an AC of 14 from its scales and attacks anyone- it has no loyalty to its caster. It will attack the nearest being when summoned, but is ejected at about the range of a spear's thrust when the spell it cast. While this spell is quite powerful compared to most 1st level spells, the fact the snake is a truly neutral and aggressive creature makes this spell more powerful; normal summoning spells are restricted in power at 1st level simply due to needing the spell to be “safe” before casting. Not so for the Cappyrs Snake.

Additionally, the snake can be “cut” down to size when summoning it, by chopping at its body with a karate chop by the spell caster. You can make the snake “small” at 1 HD and d4 damage, or “medium” at 2 HD and d6 damage, or keep it as the normal large version. This requires the caster to make a saving throw vs magic to successfully do, and on a failure the snake isn't put out far enough and attacks the magic user instead. The snake lasts for 6 combat rounds.

[2] Monitor Monitor - 1st level
This spell makes a lizard. The small monitor lizard is a 1 HD creature with a 1d4+1 bite and an AC of 14 from its fast feet and scaled skin. The monitor lizard is like any other, and has a reptile brain filled with nothing but thoughts of food and fighting, and maybe fucking, though its unlikely to get a chance since this dimension doesn't have its exact species.

The monitor monitor is extremely territorial. It will attack absolutely anything that enters its “territory”, which is wherever it is summoned, usually a single room or small copse. The monitor will not attack the party as it considers them objects in its territory, unless they leave and try to reenter the area. It will attack giant monsters, armored warriors, terrifying ghouls or literally anything else that tries to come in, biting and gnashing with its claws, even breaking its teeth against foes too tough for it to bite. The monitor will always fight to the death and lasts for 6 turns until it disappears.

[3] Sunlit Marble - 1st level
Conjuring this marble requires a source of direct sunlight, though it can be sunlight produced through a magical item or spell. The spell condenses a small amount of the sunlight into a small marble which floats in mid air. If the marble is hit with an attack (AC 20 for ranged attacks since it's so small, but no need to roll for melee since it doesn't move) that deals 4 damage or more, it is shattered. Beyond this, the sunlight marble can continually produce light as a torch in its same spot for up to one full hour before fizzing out, allowing sunlight to be sustained in a small area even after night falls or if the sky is magically blocked by darkness.

The Sunlit Marble is an intelligent creature. It holds sunlight in itself and has a love and respect for all life, while it has a hatred of the undead. Every round, it casts turn Undead as a level 4 Cleric, and all Undead must flee its radius of light on a turned result. It can deal normal damage or kill vampires, if they were dumb enough to enter the field of light.

The sunlit marble can 'speak' in slow pulses of light that let it communicate; it can report what it has seen but only knows the difference between things if they are “bad” (undead), “good” (alive), or “tickles” (plants, because they feed off its sunlight).

[4] Summon Groveling - 1st level
The Groveling are the most pathetic race to exist. This isn't an opinion, it's a fact. Grovelings occupy a cosmic position on the hierarchy of all beings, they are much lower then most pets and are certainly lower then even the most low born human; most trees are higher on the scale. They are “people” in the lowest possible state they can be. Grovelings are beings that exist to serve other beings, and are often summoned by goblin Sorcerers looking for an ego boost. They aren't native to the normal dimension, as any world that has predators would be too dangerous for Grovelings.

When a Groveling is conjured, it will instantly bow down before and furiously worship the first living being it sees. They appear as gremlin-like creatures, with patchy fur (it doesn't grow back), bright sad eyes, and a tiny frame. Most are less then 2 feet tall. They have washed out colors that prevent them from being attractive or beautiful but they are too colorful to blend into their surroundings. They are as intelligent as a kobold or goblin, and can use tools, but are simply pathetic. All Grovelings have 1d2 hit points, an AC of 5, and deal ½ a point of damage on a successful hit in combat with any weapon- this means that at least one other Groveling must hit the target for a single point of damage to be made, or the target be hit with a small nonlethal attack, be a near miss for an AoE spell, be cursed, or have some other method to make the half a point of damage tick to a full point. The exception to this rule is for swarms of tiny beings like worms or insects; Grovelings can kill a single member of the swarm per round. While a single member of the swarm is just an annoyance to you, and the swarm is the danger, to a Groveling the individual of a swarm is like a wolf it must face in deadly single combat.

While extremely weak, the Summon Groveling spell is a commonly taught first summon for many magic users. Grovelings have names and can therefore the same individual can be summoned multiple times if they don't die (unlikely). They stay within this realm for the duration of 1 day, and will obey any order given to it by an intelligent being who isn't directly trying to murder it; they are spinelessly loyal to a fault and will tolerate a large amount of abuse before thinking of escape.

[5] Spinsticks - 1st level
This spell creates a small white stick. The stick is actually a living creature from another world; a close look reveals a small bump on its body where it's primary nervous system is located, small discolorations near each end are 'eye spots' to help right itself, and several centrifugal muscles help it perform its one job. When the stick is spun standing up, it keeps spinning for two turns. After the two turns is over, it has lost its energy and falls to the ground dead. The spinstick can act as a reliable timer in a place where normal methods of keeping time do not function or are influenced by malign forces. The spinsticks can also act as a distraction or trap by spinning something on its head; a plate or flaming candle dish that falls into the oil on the floor when the stick stops spinning.

[6] White-Faced Oil Monkey - 1st level
This spell conjures a White-Faced Oil Monkey. The creature is a small, long tailed monkey with a painted white face like geisha. It carries a small gourd with a stopper around its neck, which is filled with oil with a blueish tint. The power of the White-Faced Monkey is that it can communicate with any creature with hands using a type of special sign language. As such, it can communicate with lemurs and raccoon, as well as larger monkeys and apes, and then translate these to humans using a more complex form of sign language, or by writing down what was said on a piece of paper provided to it. The monkey notes that otters have a distinct “water” accent, and the monkey cannot communicate with oceanic creatures even with hands, as their accent is too foreign.

The monkey is a 1 HD creature, but has an AC of 18 as it can dodge, jump, dance, and easily avoid almost all physical attacks. It cannot attack. The monkey is not a slave but will follow and obey whoever summoned it, becoming playful and playing pranks if ignored or running away if put into a bad situation on purpose by its master.

Finally, the monkey carries oil. The oil in its flask is a blue spirit oil, which flows like water for living beings, but is as slippery as the Grease spell for any spirits, ghosts, or intangible beings. This can prevent many ghosts from materializing, as they must stay still to do so, where as this oil will make them slip away. The monkey lasts for up to 1 turn if summoned for communication, or for 1 round to pour out its oil and vanish, as it ceases to exist when its oil is removed from its gourd.
Posted by Cacklecharm at 6:00 AM