Wish is the best "Spell" 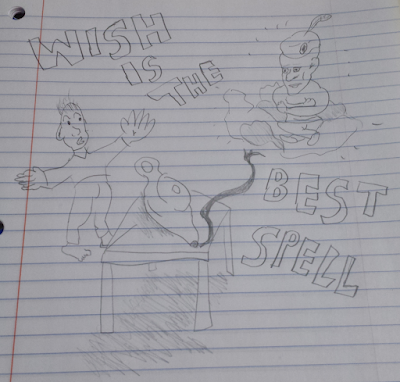 Wish is the best magic spell. Or more accurately, it is the most “magic spell” of every magic spell. The entire concept for this little diatribe was based on the simple prompt- What if there was only one magic spell in a fantasy setting or world? Wish would be the best. This isn't necessarily referring to D&D's version of Wish, but just the power to “Wish” in general.

Many fantasy settings and fairy tales already only have one spell, and that spell is Wish. Wish is the perfect spell. In order to make a Wish, you have to speak your incantation. “I wish...” is a perfect incantation for a magic spell, as it makes everything after it dramatic. It's perfect because you can't take back a wish, you can't say “Maybe I could have....”, no. You have to say “I wish”. It adds a air of finality to it.

Secondly, Wish is great because it is so flexible. Both in universe, you can wish for anything or everything, but wishes can also be restrictive too depending on the power level you are going for. You can also make wishes as subtle or obvious as you want; from big glowing clouds that grant you your desire, or just a simple snap of a genie's fingers and it happens.

Thirdly, Wishes can be bad too. While I'm not a fan of the generic “wish twisting trope”, I do like when poorly thought out or greedy wishes backfire. Dumb monkey paw wishes like “Oh I wish had a million dollars” and then a million dollars in pennies buries you in an avalanche and you die and the moral of the story is 'be careful what you wish for lol' is fucking stupid. But King Midas? That's a GOOD example of a Wish getting twisted. He was too greedy, he didn't just wish for the richest kingdom in the world, he wanted the power to turn everything he touched into gold, and he paid the price for it.

Finally; Wishes also fit great into a roleplaying game. Especially due to the ease of inserting senses that aren't easily put to paper, as well as being able to live out many years or a long period of time in a campaign rapidly that would be impossible in other forms of media. Wishes are the ultimate magic spell, they just are the kind of thing you keep at the end of the game. Something powerful and rare and sought after, which is what many people want magic and magic spells to be like anyway.
Posted by Cacklecharm at 6:00 AM