I was reading this Goblin Punch article about mutant spells again recently, and it got me thinking about how much I like this nested table. You roll a d20 on a normal spell mutation, but a d30 on a mutate spell use. This unlocks new potential outcomes as well as increasing the chance of a specific result: New Flavor.

The New Flavor indicates the spell is changed in its elements, alignment, direct use, or otherwise. It goes from a 10% chance on a mutant spell to a 13.333% chance, making it the most likely outcome on the big table. But what about wordplay?

Change the mutant spell table; 18-20 is a New Flavor of spell. 21-22 is a New Name- change a single letter in the spell's name. If you want to do it randomly; roll the biggest die you can fit the spell's name with the unnecessary shit cut out (no Greater, Lesser, Melf's, etc.) and then remove the letter that it rolled. If you roll over, you then add a new letter instead. This makes weird results; Grease can never become Greasy but Knock can totally become Knocky.

Anyway, if you don't care about any of this bullshit, here's 4 Knock variants. 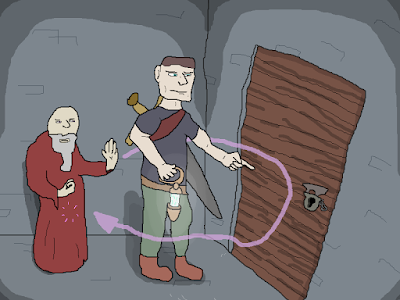 4 Knock Mutant-Spells
[1] Nock
This spell nocks any arrow you see onto any drawn back bow you can see. If there are no arrows; a bunch of twigs and leaves and bones and particles of dust and grime form into a rough shape of an arrow instead. The improvised arrow is destroyed on impact but deals 1d3 damage.

[2] Knck
Summons a minor demon of torment named Knck. He is a lesser familiar and can throw 1d4 flame damage fireballs, fights as a 1+1 HD creature, and has +1 AC and to hit. He carries a book with eighteen horrible faces in it. If you agree to mutilate the faces in the book; drawing crude symbols, slashing eyebrows, pulling lips and creating blemishes, he'll give you a silver coin. Your conscious weighs on you heavily. The faces are of course tied to actual people in hell, being punished for their envious greed, their faces warped as the drawings. Knck is only bound to serve you for 1d4+1 turns, but might stick around if you're really cruel with the faces.

[3] Knok
The name of an ancient caveman hero, slayer of dinosaurs and mammoths alike. Your characters may not know this, but they do know screaming KNOK!!! at the top of their lungs before attacking a huge prehistoric beast gives them +2 to hit and damage on their attack. Additionally, gives advantage to saving throws to do things like jump on a dino's back or avoid getting scared off by their death roar. Knok has up to three invocations, usable by anyone who hears and shouts along.