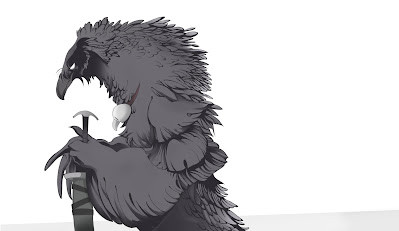 You are a Crow from another world. The bipedal birds are swift, dexterous fighters- though not as tough and durable as other races. When generating a character, roll 2d8+6 for your Dexterity score. Otherwise, roll your stats as normal. You start with +1 To-Hit and AC from passive evasion.

Your job is to harvest the souls of beings from other worlds. Most beings will simply pass on when their time runs out; but especially powerful souls have ways of extending their lifespan. When souls get too old and powerful, they begin to go insane and become demonic, hence the need for specialists when a Soul gets too tough to pass along on its own. This is where you come in.

You can also cast spells. You have no ability to learn or prepare spells yourself, but if you are ever granted spellcasting abilities, magic dice, or other elements of magic you can use them yourself- use your To-Hit bonus as your effective caster level when you cast a spell.

At 1st level, you are assigned to collect the soul of a powerful immortal being in the setting. This could be an immortal lich or vampire, an elder dragon, an aboleth, or any other powerful being that has lived far beyond when it should. Technically, you are an immortal yourself; but your aging is "unpaused" as long as your "door" remains open.

You come from the Land of Doors. When a soul is assigned for collection, a door will open- this is your door. Your character will appear from seemingly thin air- a magical locked door that keeps the riff raff out of the Lord of Door's domain while you do your business in this living realm. When you collect the soul, you will need to bring it back through this door before it can manifest itself a body again, or fly away from you when you're not paying attention!

Upon reaching 10th level, you become a Gray Crow and can now retire to the Land of Doors as a secretary or manager role. Besides becoming almost immortal, this will grant you the ability to call in some favors and open doors between worlds. Anyone entering a door will enter into the Land of Doors, a safe neutral zone where no wandering monsters exist, and can exit out of a different door to rapidly travel between places in the campaign world. You are also free to explore the living world yourself; but the longer your door remains open, the more you will age.

While the power of the Lord of Doors is awesome, it comes with limitations. Doors cannot be placed in an area where the crow has not been, except for the first door that begins their contract. Also, doors aren't placed within random chambers, but instead at crossroads. You couldn't place a door in the treasure room of a dungeon to easily haul it all out, but you could place one at the mouth of the dungeon and one at the town, thus bypassing the need to carry it back home.

Note- Is this overpowered? Almost certainly. However, I kind of like the idea of a 1st level character being told they have to kill a giant monster or demigod and the whole campaign they're kind of gearing up and preparing for it. I think that's fair in exchange for something a decently high level magic user can just do multiple times per day anyway.