In the frozen cold north, the people who live there are whales. Big, bipedal whale people. They can hold their breath for a long time, and are excellent in the cold, but are big and fat and clumsy on land as anyone would imagine a whale to be.

The Monads are whale people. They look like Belugas or Narwhals. They live in tribes with semi-permanent fishing grounds. You can't grow anything up here, so they survive pretty much just on fish. No wood, so they just use bones and metal for everything. But to supplement their health- they have their magical hotsprings. Also, some of them are magic. You can play as one if you want. 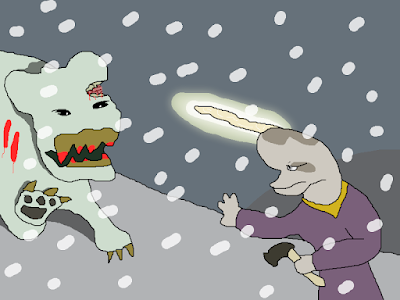 Monads
Base AC- 11
You are large sized.

Monad Culture
Highly nomadic and sociable, the Monads live in loose groups and fit in well in almost any culture, including human and other foreign races. They can be found in almost any port town or sleazy pirate haven. Even an inexperienced Monad is likely to get hired if just for their size and strength- and not to mention their inherent abilities in the water.

Monads tend to gyrate between extremes; they want all the physical comforts and luxury in the world and to be surrounded by company in one moment, and in the next, crave solitude in a very cold or very barren place, as though to test their own limits. Part of this spiritual desire for hardship and self growth may be the result of their magical horn. Monads subjected to many life experiences may end up falling more towards the side of spirituality, and grow a horn.

The horn is a symbol of potency and wisdom among the Monads. It is their witch-mark, though for the whale people, it is a purely positive connotation. Because the horn is only in a small number of their population and it has an inherent use as a Holy Symbol, those with it are often promoted to higher ranks among their society- usually mystics or priests to keep watch over the dead.

Of course, those with horns are free to be adventurers if they so chose. But one should know that a Monad's horn makes for a very fetching prize in many kingdoms as a magical material or aphrodisiac. As such, Monads with horns are more distrusting of outsiders- else they get harvested for their ivory.

Magical Hotsprings
The Monads live in the north. While many camps and places there are within glaciers and ever-frozen ice flows, some of the places there are sparse, green covered arctic lands. While the land and water is cold, the space between the earth may be very hot; the energy underneath the earth churning magma or gas. Upwards it rises to create geysers, pits of burning tar, and more comfortable hot springs.

The Monads use these hot springs as gathering places and holy sites. As they are more comfortable in the water then on the land, these are their "thrones" to where the most comfortable among them may sit. Most homes are built over a hot spring or pool. But deepest inland and most secretive of them all are the magical hot springs; water from the earth enchanted with ancient magic that gives its waters a unique property.

These hotsprings have magical potency when drank or spilled over the body. However, the magic of the hotsprings loses its potency as it cools- only a fraction of it remains once removed from the pool. Due to the difficulty and cost of traveling rapidly depreciating liquids; little industry exists around these hotsprings except for the adventurers within the local area. As long as one has not offended the head-horn around these parts; a quick dip for a guest is never out of the question.

Each tribe of Monads will have one magic hotspring- roll on the table to find out what it does. The "Hot" Effect happens only if the water is still warm from the spring itself; one turn if you soak in it and get out, one hour if carried in a waterflask, and a constant effect if you're in the spring. The "Cool" effect is what the water does once cooled off- has unlimited shelf life. 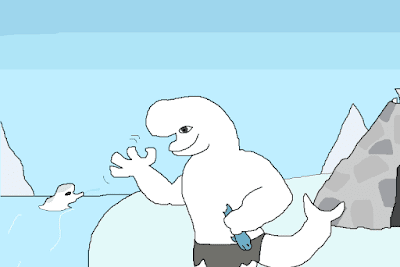 Magic Hotspring Table - Roll 1d6
[1] Toughness Spring
Hot Effect: AC of 16 to all wet.
Cool Effect: Adds +1 AC for one combat encounter (turn) if dumped on a person, protects wood or cloth equipment if soaked from a single Destruction effect or until dried.

[2] Sidhe Spring
Hot Effect: Charm Effect (to anyone not in the Spring)
Cool Effect: Adds +1 Charisma modifier for one roll if mixed in with makeup- usually lasts about a day until it is sweat away or cleaned off.

[3] Healing Spring
Hot Effect: Restores +1 Hit Points per Hour Soaked
Cool Effect: Can heal a minor wound (stubbed toe, cat scratch, etc) that it is poured on. If you drank a barrel of this it would act like a minor health potion.

[4] Cleansing Spring
Hot Effect: Reverses 1 Day worth of disease progression per day soaked. Curses are put on hold if you bathe here at least one hour per day.
Cool Effect: Can be splashed on one undead creature; creature is Turned for 1d4 rounds.

[5] Arcane Spring
Hot Effect: Allows the Magic User to prepare a spell one spell level higher then their highest possible. This spell is prepared for up to 1d6 hours after leaving the Spring.
Cool Effect: Drink a beer stein's worth to recover a 1st level spell.

[6] Prophetic Spring
Hot Effect: Advanced knowledge of who will appear before the spring to whoever is sitting within. Can see the next result on an Encounter table.
Cool Effect: Adds +1 or -1 to your next roll, declared before you make it.