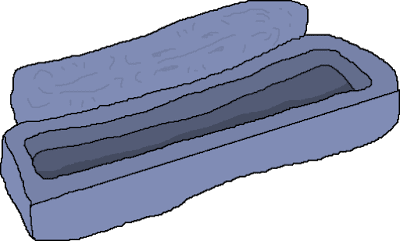 Your player character has just passed by the Celestial Guardians, defeating them. You have slain a great evil or found a secret place. Maybe you have Wisdom 18 or are a very holy man, maybe you have done great deeds.

Regardless of the reason, you are now offered a chance for a greater cause. By laying in the blue-iron sarcophagus; you will fall into a deep sleep the moment the lid is shut. At that moment, your body will be put into a magical slumber that purifies you, making you immortal and ageless, as well as giving you absolute health and the cure to all disease. The coffin is unbreakable, totally unable to be opened by any means. But you are asleep, and will remain that way for ages long since. The rise and fall of your people, and of many hundred more mortal races, will pass by without end as you sleep.

You will awake only at the end of time, when the fabled heroes of old awaken to battle with the most evil machinations long set in motion upon the first night of the world. You will be among the number of the great heroes, the Sleepers, who must fight to determine the fate of the world.

If you lay down in the coffin, you'll lose your character. Consider your character gone. They aren't dead, just asleep, and the world they will become awake in is so far from your campaign that nothing in it will matter in that lofty time of ancient prophecy. For every level your character had, or for every great deed they achieved, grant yourself one karma.

When you make your next character, you may spend Karma to;
Posted by Cacklecharm at 6:00 AM