Eat big to get big 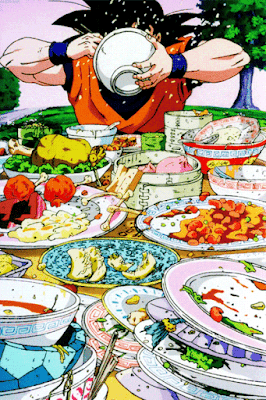 In real life, professional athletes have to eat a LOT of calories in order to sustain their lifestyle. We also see something similar as a stereotype in a lot of Shonen anime/manga, where the heroes eat tons of food to keep up with their lifestyles.

While not necessarily realistic, I like the idea of powerful or high level characters needing to eat a lot of food, or at least food of high quality. You could easily fit this under the idea of these characters needing a ton of life energy to power their bodies; or you could argue their superhuman muscles and skill require tons of protein and vitamins to create their ultra strong bodies as well as the energy needed. This of course implies that characters can either train or gain stat improvements through level ups; otherwise the higher end of this chart would never be reachable.

Count up all your characters' hit points modifiers for their Strength and Constitution- NOT including ones gained from magic items. If they are a Fighter of at least 5th level, add +1

Fresh meat is just typically seen as something very healthy to eat; high amounts of protein. Your character may have to hunt for deer every once in a while on a long journey.
Rich meats are cultivated, slightly magical foodstuffs that you might see in a fantasy world. I'd say the meat of a typical monster, a prize winning domestic animal raised with love, and so on.
(Note that a really skilled chef can semi-magically make decent or standard foodstuffs into stuff that can feed the appetite. Of course flavor doesn't equal nutrition, but in fantasy it can.)

If you don't get enough to eat, your characters performance suffers. You drop down the highest possible modifier(s) you could have at the hunger level they can sustain. For example, if they can only scavenge maximum 3 rations on a desert island, but their total modifier is +7, then their Strength and Constitution are lowered until the stat total is equal to +6 until they can feed it.
Posted by Cacklecharm at 6:00 AM