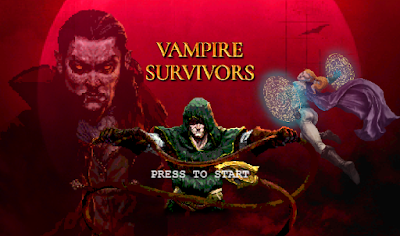 I think this game may be a flavor of the month thing. Still, it's pretty awesome. I really like Vampire Survivors. It's an indie Roguelite with some permanent progression- heavily inspired by Castlevania's art, monsters, and weapons. It's an autobattler; you only control your characters movement while your weapons fire automatically- every time you level up you can get random weapons or support items and using different combinations let you create combos and evolve weapons into higher forms. Half the fun of this game is seeing how powerful your combos can get, while the game spawns literal screen-full waves of enemies to slowly walk towards you and attack.

It's a really fun little game, pretty addicting, surprisingly strategic, and it's only 3 dollars. Sadly, I missed telling you about it when it was on sale for 10% off. You could have saved 30 cents, lmao. Developers are still active on the game, and have a LOT of content planned. I know a lot of people out there refuse to touch early access games- and I don't blame you- but even if that is your concern, there is more then enough content here to justify this purchase easily.

But anyway, this isn't a shillpost for the game- though I do hope this encourages you to check it out. The real purpose for this post was that this game is at its surface incredibly simple; your attacks just do damage. There's no elements or damage weakness types, very few "status effects" really, almost no mechanics, and yet you can screw yourself over if your build has a bad combination of weapons and items because you need a diverse arsenal. Even something simple, like vampire bats or medusa heads being immune to holy water since it's on the ground, isn't in the game. But when every enemy pretty much just slowly walks at you- how can there be a game with some actual depth and thought behind it?

Despite its apparent simplicity, there is a bit of complexity in how the weapons in this game work. Every weapon has a specific firing pattern. For example, the Wand shoots rapid fire but weak bolts at the nearest enemy. It's a highly reliable source of damage against the biggest threat to you in the moment, but bad against crowds and bosses. Several weapons, like the Holy Water and the Rune Tracer, deal great AoE damage but you have zero control over them- not amazing against bosses but strong against crowds of weaker foes. There are also weapons that are very strong, but have a long cooldown, like the Lightning and the Bible. Some weapons, like the Whip or Axe, always shoot in a reliable direction- the axe up and down, and the whip horizontally. This lets you cut through crowds of mobs to escape getting trapped. Finally, the knife is a weapon that shoots high damage, rapid fire, but small and hard to aim projectiles directly in front of you- excellent for killing bosses, but meaning you have to run towards the bosses to aim at them, since your movement is the only way to aim anything.

From this, we can extrapolate a sort of system for other games, including tabletop games, which add granularity to the relatively simple game mechanic of "hit things until they die". Despite all of them just "doing damage", the concept of different fantasy classes or roles in a combat focused game having defined and useful combat roles despite the apparent simplicity is really appealing to me.

For example; characters like crossbow users or rogues can deal very high burst damage all at once to individual targets. The implied combat "role" here is taking out high value targets. Enemy spellcasters, monsters on their last legs, and really dangerous monsters like level draining undead or creatures that have many attacks to take out at range.

What are all the different ways you can do combat when it comes to fighting monsters or groups- ignoring things like in universe fiction or damage types? There are four ways to think of damage in a non-timing environment (turn based) against all other concepts like in universe fiction, elemental damage types, random chance to land a hit, and so on. These four types will be near and far in range, and many targets with low damage, or few targets with high damage.

As you can see, it doesn't really work 100% to import this kind of system into a fantasy game world. The fiction of the game space doesn't line up with this concept of damage. Fighters are both "tanks" but also can do a lot of damage- they swing around big weapons. In the same vein, it's rare to see characters designed around the concept of doing slow, consistent damage- especially at range or with an area of effect, since by necessity focus firing attacks or spells on one target to get rid of them quickly is more important then dealing 2 damage to all goblins in a room even if that will mathematically kill them all faster.

This may also be the reason that fantasy games tend to have more elements thrown in. Most games have some amount of randomization when it comes to attacks- at least randomized damage plus chance to hit or absorption of hits depending on the ruleset. This is probably to stop games from being mathematically solved quantities- like if the rules say every attack with a human swordsman does 3 damage and the troll has 9 health and recovers one health per turn you can do the math to see exactly how long it would take or how many counter attacks you'd be forced to take; thus letting you know the outcome before it happened.