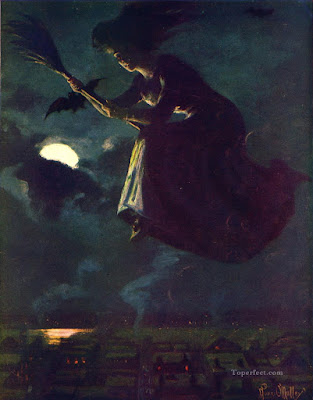 Some of those who learn the power of magic do so in institutions, where as others learn in small groups or through master-student relationships. Witches are of the latter. Most Witches are women, but not all, though all are inducted into the hedge crafts from small covens or from their mothers teaching it down the line of descendants. Witches have a special appreciation for the natural world, and are most likely to understand and channel the natural magics of the world then the more artificial, arcane magics of your typical school taught Sorcerer.

Witches can cast spells. They gain spell slots which can be used to prepare and cast spells, the table below shows the spell slots they have available per level.

As a Witch, you are skilled in curses, hexes, and spells that enchant the minds of others. At 4th level, Witches gain the power to Bewitch people. To Bewitch someone is similar to a Charm spell, except it has an indefinite duration and the Bewitched person can be convinced or tricked into doing things a Charmed person normally wouldn't do; like attack someone else on the Charmer's behalf. All Witches know at least one method to Bewitch someone, which they learn once they get high enough level to put people under their spells.
Bewitched individuals have another weakness; any important item or part of their body (like a scrap of hair) can be kept by the Witch as a Fetish. Fetishes can be cast in spells and rituals as though it was a person, allowing the Witch to cast spells at a potentially infinite range; but the Witch and the target must be within the same plane of existence or dimension. Additionally, anyone who is Bewitched always fails the saving throws against the Witch's spells.


At 10th level, you become Elder Witch. You attract the attention of young girls and wandering men to join your coven- and you have learned an innate understanding on how to manipulate the politics of Witch society. You also cease aging, but most Witches at this experience level are old and will as such continue to be old. You also learn the secret ability to make flying brooms, both for yourselves and to grant to other beings. Anyone can ride a flying broom as long as they are not too heavy, but for nonmagical folk, it can be quite hard to guide the bucking broom. It costs 6000c to create a flying broom, and you can make two per season. It is quite possible to manufacture flying brooms, but due to their bristles dulling and falling out with use and due to the fact they are easily burnt by fire flying brooms tend to get lost through the years much quicker then other magic items.