Stories for a Bed

You are traveling in the farther reaches of the realm, the backroads, the quiet country. Perhaps you are on your way to an ancient ruin in a far off place, or this is a simple leg of a longer journey. As night falls, you pull into a tiny village. The hamlet is tiny; only a few hundred people live here at most- the largest building is the old stone church on the hill with an adjoining graveyard. You go to a farmer pulling an empty wagon and ask where is the local inn for you to stay that night. All you get back is a stare, and an offer.

Not every town or village is going to have an inn or tavern where you can spend the night. It's too small of a town, not enough travelers- there would be no business! You could just try camping out on the side of the road, but that's a good way to draw even more of the villager's distrust. Instead; more then likely, you'll want to be spending the night with the locals. You probably have more then enough coin for them; but these people are humble, and probably view guests as sacred. You offer them something more valuable then a simple monetary exchange for their service- a look into the wider world.

Hospitality
Hospitality is a very serious thing. It is a sacred pact between host and guest. Groups of adventurers are very likely to be offered a place to stay if they spend any time in the village or if they appear in need in any way. If you think it's unrealistic that a random villager would offer to open their doors to armed and dangerous looking vagabonds and freaks; consider that these armed vagabonds could probably just force their way inside if they wanted- and the villagers know that. Invoking the rights of hospitality solves the problem for everyone.

These stories do not have to be true. 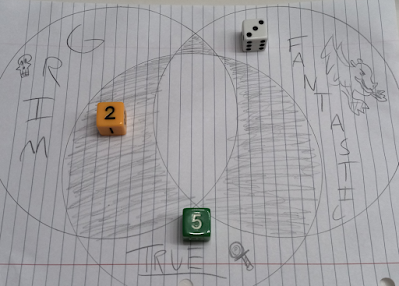 The Story Circles
Take out a piece of paper and draw a Venn Diagram with three circles. Draw big. Label one circle Fantastic, one Grim, and one True. Then, use any six sided die.

Your players will be telling a story. Tell them to get creative; recap their adventure to this point, go over what happened the last day, how the fighter lost an eye, whatever.

In most cases, you will be telling a story as a party. In this case, begin the die on the section of the chart that makes the most sense, and keep it on a one. Whenever any player/character adds something to the story- move the die one section towards whichever direction they are veering the story towards. For example; if you begin the story about how you defeated a powerful dragon; start it on Fantastic. If the quarter-master goes into a anal-retentive rant about how they got the wrong kind of goat to feed this specific subspecies of dragon, move it a step towards True, putting it into the Fantastic/True zone, and then move the die's value up to two.

You can also use this as a rough estimate of time; each value on the die is one turn unit or ten minute interval of time used to tell the story.

To determine exactly where the die should move each turn, consider the subject matter and how the player tells it. Each "subject" of the story is what moves the die- not details. If you tell about how you smashed a bunch of spider eggs, which attracted the spider queen, who then poisoned and killed a friend of yours- that's all one 'subject' of the story. If you then say you traded these spider eggs to the nearby goblins for safe passage through their territory- that can be a second subject.

Each circle on the diagram sort of represents a genre of story or overall vibe as opposed to specific elements. Grim stories are anything related to survival, brutality, meanness, revenge, injury, etc. Fantastic are more for anything that is related to the wonderful and mystic- tale of far off lands and true love's first kiss are as relevant as a fight with a dragon. Finally, True stories are are for anything that is both mostly true, grounded, and relevant to the villagers or people you are telling the story to. Talking about intrigue at the divine court of Gods won't count as "True" even if it is, but if you say you slain a local monster- that is relevant. You could also rename this category to "Local" or "Believable", which might work better now that I think about it.

At the end of the story- either when the events of the story are concluded or the players have nothing more to add, check the value of the die.

How the Story Lands
Check the value on the die first-
One or Two: The story was too short- boring. What about news of the outside world? Where's the adventure, the intrigue?! What a bunch of graceless guests you are. (Nothing)
Three or more: Good story! (Check Gracious Host table below)
Maximum Value on the Die: Too long. The children are falling asleep and the wife excused herself to do some cleaning. (Nothing)

Also; you can use a bigger die (meaning longer, more impactful stories) under these conditions;

Then, check the location of the die on the chart-

If the die is on the Fantastic portion, you have brought more wonder and a little bit of magic into the world. You are inspiring people with your stories, and further spreading your own fame just a little bit by telling them. You gain bonus XP. The amount of bonus XP will vary depending on your game- but I'd say something like each character in the party gets (5 x their level) x value of the Fantastic die.

If the die is on the True portion, your stories are the most morally correct and useful to the villagers; not just because you aren't lying but because you are fulfilling the sacred duty of the guest. Essentially, it's a good deed. You could think of this literally, like the winds of fate or the direct intervention by the Gods to reward your kindness, or more abstractly, as a sort of meta-game currency to reward players for staying in character and immersing themselves in the game world. The number of points on the die is written down and the next die roll used by or against the party will be manipulated by that number in their favor. The first arrow shot by an orcish ambush has its To-Hit roll reduced by three points- miraculously turning a hit into a miss.

If your die is on the portions between any of the three categories- divide the die's value evenly among the categories- if the value is two or less, it is ignored. So if you have a story that ends on a Fantastic/Grim note, but only has a value of four, then you get no reward for the story (you can round up for odd numbers at least). You can also see that getting in the center of the wheel makes it impossible to get a reward with a six sided die- it may sound unfair, but remember, you're the one telling an unfocused jumbled mess of a story.

You can also totally use this graph/Venn diagram as a story generator table. Just roll + drop a die over the piece of paper and wherever it lands and its number is the mood and length of the story. So when you ask your hireling where he is been since he creeped out of camp a fortnight ago and he goes off on an epic ballad of saving a princess, you can be sure it's 100% bullshit, but at least it makes a nice story.

Posted by Cacklecharm at 5:05 PM